Crucifixion is a form of capital punishment used by Caesar's Legion.

Crucifixion is a form of punishment where the victim is tied to a horizontal beam attached to a vertical one (the eponymous cross) and left to hang. Death is slow, occuring as a result of asphyxiation, exposure, infection, or a combination of these factors.[1]

Crucifixion is inexpensive and easily arranged. The Legion commonly uses power line pylons as readily available crosses: They are sturdy, easy to move, while the crossbeams and climbing rungs are effective aids not just in hoisting the victim up on the cross, but also in supporting the ropes the victims are tied with. The Legion does not use nails to mount victims, which conserves resources, but allows the condemned to be freed (which does not happen often). Unlike its inspiration, the Legion crucifies the condemned without making them strip naked.[2][3]

In terms of incidence, is is associated exclusively with the Caesar's Legion in the Southwest, which uses it as the default form of capital punishment. The slow, wasting execution also doubles as a tool of terror and discipline: When the Twisted Hairs tried to resist assimilation, Caesar had all the defiant tribesmen crucified along I-40 as a symbol of his power and reminder to other tribes.[4] The same approach is practiced in the Mojave, where the town of Nelson was sacked and much of its population crucified to undermine the morale of the Republic and local populations,[5] while NCR soldiers captured at Nelson were hanged on crosses in full view of NCR positions to either force soldiers to watch their comrades in arms die or force them to mercykill them.[6] Understandably, local leaders such as Benny are terrified of the prospect of them taking over the Mojave.[7][8]

Notably, crucifixion does not discriminate. While the Legion will crucify underperforming slaves and those who violate its laws (such as Anders, for offering drugs to legionaries), even vital assets may wind up on the cross if they fail a task given to them by Caesar. Extraordinary service may be an extenuating circumstance, contingent on redeeming themselves - though in Caesar's view, crucifixion itself might be a mercy, as there are worse, unspecified punishment available to him.[9]

The player can put crucified people out of their misery for no Karma loss. These "kills" do not give XP, but they do count toward kill total and progress toward such perks as Lord Death. The only thing that can be scavenged from the corpses is their clothing. They cannot be set free, with the exception of the crucified soldiers at Nelson and the Great Khan drug runner Anders at Cottonwood Cove (but only if the requisite quest is active).

“Question: Elaborating: Rape in fiction can be a trauma trigger. Your game has Cook Cook raping left and right. I want to understand why you thought this was necessary and important, considering Fallout didn't have this, not even when Tandi was kidnapped

Anything that has been traumatic for an individual can be a trauma trigger when portrayed in a fictional environment. Fallout's recurring theme is "War never changes." Rape is an element of war (often a conscious and intentional tool of war) and is often an element of post-apocalyptic fiction used to show the depravity of humanity in the absence of law (e.g. The Road Warrior features rape directly, albeit viewed through a telescope). F:NV features two major powers engaged in an extremely brutal conflict with myriad small groups (like the Fiends) taking advantage of the chaos. They engage in a full spectrum of cruelty against each other including crucifixion, limb mutilation, torture, booby trapping wounded soldiers (and corpses), mass irradiation, enslavement, and yes, rape.”— Joshua Sawyer, Formspring

A woman enslaved by the Legion and crucified at the Fort 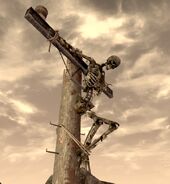 Skeleton left on a cross at the Fort