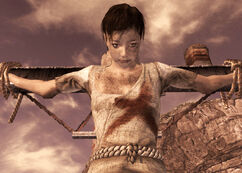 Crucified slaves are people who have been captured and then crucified by Caesar's Legion to serve as both a form of punishment and an example to those who break their rules.

Trying to interact with a crucified slave will give a message that says they are near death and attempting to remove them from the cross will kill them.

Retrieved from "https://fallout.fandom.com/wiki/Crucified_slave?oldid=3328162"
Community content is available under CC-BY-SA unless otherwise noted.