HairGhoul01
“You're a nosy little bastard, aren't you? It's true. Tenpenny is a bigot, but the others aren't. All I want are those keys.”

Mister Crowley is a ghoul resident of Underworld in the Capital Wasteland around 2277.

Mister Crowley is a ghoul, who transformed over 20 years ago[1][2] due to an extreme exposure of radiation that should have killed him. He once lived at Rivet City, but the bias and disdain he experienced there forced him to move on to greener pastures. Crowley discovered Underworld and has taken up permanent residence, but remains resentful of the harsh treatment he received from humans. He presents the Lone Wanderer with a complex revenge plan that he wants them to carry out. Mister Crowley spends most of his time in the Ninth Circle, drinking heavily.[Non-canon 1]

Crowley and four other mercenaries - Dave, Jeff Strayer, Dukov, and Tara - were sent to Fort Constantine by Allistair Tenpenny to retrieve a rare weapon. During the mission, Crowley was locked in a room full of feral ghouls by Dukov, who wanted to increase his own share of the payout. Crowley survived the imprisonment and harbors a passionate resentment toward those who left him behind.

Mister Crowley can usually be found in either the Ninth Circle or his bed at Carol's Place in Underworld. He usually sleeps until 12 PM.

Mister Crowley appears only in Fallout 3.

The Fallout 3 Official Game Guide uses the lyrics to Ozzy Osbourne's song Mr Crowley in its walkthrough of You Gotta Shoot 'Em in the Head. 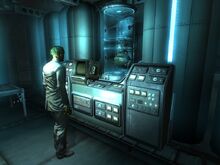 Crowley in the Fort Constantine 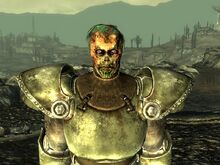 Crowley in the power armor