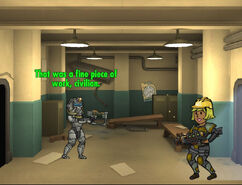 was accosted by a Deathclaw. Lend him

Crossing Paths is a random encounter in Fallout Shelter. It can be triggered by any dweller who is exploring the wasteland.

After entering the second room of the Super-Duper Mart you will encounter two deathclaws. Once defeated, there is a some good loot to be found. Go downstairs and face another larger, more dangerous deathclaw. Once defeated you will find Star-Paladin Cross and complete the encounter. It does not matter which conversation choice you make as the outcome is the same.