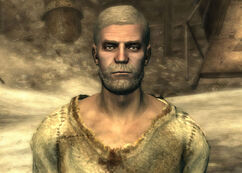 “Give your bodies to Atom, my friends. Release yourself to His Power, feel His Glow and be Divided.”

Confessor Cromwell is the 44 year-old leader of the Church of the Children of Atom, a Megaton cult in the year 2277, that worships an undetonated atomic bomb left over from the Great War.

Born in 2233, little is known about Cromwell's past: He arrived in his early 20s (he's now 44) and was granted permission to stay due to the blessing and high standing of his predecessor in the church, who fostered him in the ways of Atom. Eventually, Cromwell proved to be a valuable resource in protecting and aiding the town, and he became an eccentric distraction to most of the citizens of Megaton.[1]

Although he never mentions it, Mother Maya is his wife and female counterpart in his church.

Confessor Cromwell and Mother Maya treat Gob with respect and an air of reverence because of their spiritual beliefs.[1]

He can be seen standing in the center of town, next to the bomb, praying to it in ankle-deep irradiated water. He even beseeches Atom to "shape his fragile form." He is heard preaching to his audience about the teachings of the Children of Atom, mainly on the subject of "birthing a thousand stars," relating to his (and the Children of Atom's) belief that inside every atom is an entire universe.

Confessor Cromwell appears in Fallout 3, and as a legendary dweller in Fallout Shelter. He is also mentioned in the Fallout 4 add-on Far Harbor.

Retrieved from "https://fallout.fandom.com/wiki/Cromwell?oldid=3131290"
Community content is available under CC-BY-SA unless otherwise noted.