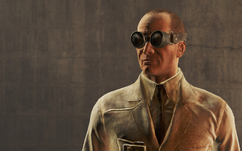 Crocker without his goggles

“A new face? Strong, but... not perfect. For a nominal fee, Doc Crocker can give you the looks you've only dreamed about before.”— Doc Crocker

Doc Crocker is a facial reconstruction surgeon operating in Diamond City in 2287.

Alongside Dr. Sun, Crocker runs the Mega surgery center in Diamond City. He is the resident plastic surgeon, while his colleague provides routine medical care. Crocker is a skilled surgeon, yet he cares more about the appearance of the patients he operates on and is not very careful during procedures. His obsession with faces leads Crocker to despise folks with unattractive looks, such as the barman Earl Sterling, who worked for Vadim Bobrov at the Dugout Inn.

Sterling sought reconstructive surgery from the doctor so that he could "get the girls." Apparently he was not satisfied with his personal appearance, because it was mainly why the barkeep had trouble interacting with members of the opposite sex. Fueled by his obsession, Doc Crocker went mad and accidentally killed and mutilated Earl during his appointment. The doctor felt guilty about what he did to the bartender and went through with trying to bury all evidence of his patient's murder to maintain his innocence, but eventually Earl's employer Vadim realized that his friend had disappeared and filed a missing person report with the security office.

Lamenting over the impacts of his actions, Crocker is unable to fully cope with the fact that he has committed murder, but continues to provide his services as a plastic surgeon. He will become suicidal when confronted by the authorities about the fate of Sterling, due to his inability to handle the psychological stresses of answering for his crimes.

Doctor Sun will take over the responsibility of facial surgery after the completion of The Disappearing Act.

By entering Doc Crocker's house (east part of Diamond City, next to Science! Center) and hacking his terminal it is discovered that he had done plastic surgery work on Ann Codman, Geneva and Abbot.

Crocker appears only in Fallout 4.

The aftermath of the whole ordeal
Add a photo to this gallery
Retrieved from "https://fallout.fandom.com/wiki/Crocker?oldid=3415185"
Community content is available under CC-BY-SA unless otherwise noted.