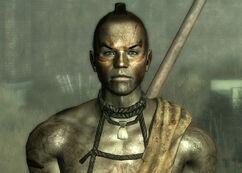 “It feels good to work with dirt, doesn't it? Some people call it work, but they don't understand.”

This rather simple man has a specially modified shovel he does not just give out to anybody. Croatoa believes in reaching high planes of existence through the power of Punga.[1]

He can be found wandering inside the outer walls of the Ark & Dove cathedral, oftentimes tending to the punga.

Croatoa will not become hostile like the unnamed tribals at the cathedral if the Lone Wanderer sides with Desmond during Thought Control, but will still attack if he sees them attacking any other tribals.

With the Child at Heart perk or by passing an easy Speech check, the Lone Wanderer can get the fertilizer shovel from him.

* Only if the Lone Wanderer has got the fertilizer shovel from him.

Croatoa appears only in the Fallout 3 add-on Point Lookout.

Crotoan Island is the historical name of Hatteras Island in the Outer Banks of North Carolina. Most famously, the word "Croatoan" was found carved into a tree at the site of the missing Roanoke Colony.

Retrieved from "https://fallout.fandom.com/wiki/Croatoa?oldid=3321910"
Community content is available under CC-BY-SA unless otherwise noted.