Crippled Limbs are caused by excessive damage to the left arm, right arm, left leg, right leg, and in Fallout 3: the torso, or head. In Fallout, Fallout 2 and Fallout Tactics, the eyes can be damaged as well.

In Fallout and Fallout 2, crippled limbs impact several aspects of the player character. Targets can be crippled by aiming for the body parts. Having arms crippled lowers hand-to-hand damage and accuracy with all weapons. A crippled arm disables using two-handed weapons like hammers, rifles and big guns. If the arm crippled is the arm wielding a gun, the accuracy of the weapon will decrease significantly. If both arms are crippled, only unarmed attacks can be used. Crippled legs lower mobility, increasing the amount of Action Points required to move during battle.

Attacks to the eye have an added Critical Chance which often requires the luck roll that if failed, blinds, lowering accuracy. Blindness affects Perception and most of the time the critical effect is fatal. The eyes are the hardest area to hit. If either or both eyes are damaged, the accuracy with every weapon drops substantially. In order to heal crippled limbs a decent Doctor skill and a first aid kit or doctor's bag is required, or finding a doctor that can heal crippled limbs. In Fallout, the doctor in Vault 13 can do this. Eye damage in Fallout 2 cannot be healed by any of the in-game doctors, it requires the Doctor skill.

In Fallout 3, the head and torso can be crippled as well as arms and legs, though the Crippled Eye is gone, there is a similar effect with a crippled head. When the head is crippled, a concussion is received, constantly blurring the vision and making sounds like ringing in one's ears making it difficult to see or hear what is happening; a -4 reduction to Perception is also taken.

Having the torso crippled affects Endurance, increasing sensitivity to being hit and potentially disrupting actions. Having crippled arms results in lower damage with melee and lower accuracy, and crippled legs lower overall speed. Having any crippled limbs means either a stimpak can be used, a doctor is found, or even sleeping for about an hour. Eating food or drinking water does not regenerate limbs.

After completing the optional method of completing "Contract Radiation Sickness" in Chapter 1 of the "Wasteland Survival Guide" Quest, Moira will remove the 600 rads of radiation from the Lone Wanderer and cause a mutation, granting a new perk; "Rad Regeneration", which allows regenerating crippled limbs while experiencing advanced radiation poisoning. My First Infirmary will also heal crippled limbs.

Originally, Fallout 3 handled the crippling system by having the player cauterize their own wounds while their character screamed in pain in a mini-game. The mini-game was later removed due to the system slowing down the game's pace.[1]

Although body part damage can be achieved through manual aiming, V.A.T.S. allows more effective targeting of particular body parts. Crippling any body part will result in the target momentarily pausing to clutch the now crippled body part or reel from the injury. When using explosive and melee weapons specific body parts cannot be targeted while in V.A.T.S. The enemy is simply targeted as a whole.

Crippling the head will reduce overall accuracy and Perception (-4) of the target. Crippling the torso will result in the target flinching far more often from shots than normal. This can also affect the player character, throwing off aim and interrupting attacks even in V.A.T.S.

Weapon accuracy is reduced in V.A.T.S. by a crippled arm but still allows for using weapons. In the first-person mode, the held weapon will sway, and while this may not seem to affect the accuracy with regular non-V.A.T.S. shots, it does make the crosshairs sway significantly while using the scopes on weapons like a sniper rifle or scoped .44 Magnum, making it much harder to aim. A crippled right arm also reduces base melee damage done by 10% if wielding a one-handed weapon. If wielding a two-handed weapon (or unarmed), one crippled arm reduces base damage done by 5%, two crippled arms reduce base damage done by 10%.

Crippling a leg will result in impaired mobility, proportionately to being over-encumbered creatures who rely on leaping attacks, such as deathclaws. Crippling both of the player character's legs disables special melee and unarmed moves that are executed outside of V.A.T.S., such as Mauler, Khan Trick, or Ranger Takedown. If both are crippled, it slows down the character further. It also gives them a limp when walking in the third person.

Crippling the held weapon will ruin it and make it unusable, and/or send it flying out of the target's hand. Although the condition is zero and it cannot be used, it can still be collected and repaired, or used for repairs. The player character's weapon may be damaged by enemy fire as well. If the weapon's condition depletes, it will be unequipped as opposed to flying out of the hands. If it is an explosive ordnance it will explode, dealing its damage to the target holding it and any others nearby. Grenades can be targeted by V.A.T.S. while in the air after being thrown as well. If successfully hit on the fly, they will explode prematurely.

In normal play, a doctor's bag or sleeping will heal all crippling as well as paying a doctor. Stimpaks can be used to heal individual limbs. In Hardcore mode, stimpaks will not heal limbs and doctor's bags will work on one limb at a time or used generally to increase the health of all limbs slightly. Sleeping will only heal crippling if it is in an "owned" bed. Additionally, daturana, healing poultice, and the weapon binding ritual all apply minor healing to all limbs, enough to remove the crippled status from any crippled limbs. Crippled limbs are affected by both the Small Frame trait and the Tough Guy challenge.

In normal play, crippled limbs will heal on their own after a short while. In Survival mode, legs can become crippled if the Sole Survivor is over-encumbered. They do not auto-heal and must be healed by a stimpak or by a doctor. Crippled legs prevent running and slows down the walking pace. When both legs are crippled, traveling in the third person is drastically slower than traveling in the first person.

Most enemy limbs can be crippled, preventing enemies from moving, attacking or flying. Crippling a scorchbeast's wing forces it to land. Some enemies will regenerate their crippled limbs while others such as ghouls remain crippled until killed. A legendary enemy that mutates has all of its limbs instantly restored. Robots that are completely crippled will heat up and explode. Crippled limbs are cured by using a stimpak.

Called an Injury, both the player characters and NPCs can have their limbs targeted and injured. This is caused when an attack exceeds 5 damage to land a Critical Hit (normally 5 damage, but some perks and special creatures can have critical hit ranges higher or lower). When this occurs, a limb is injured and will cause a negative effect depending on the limb being injured. 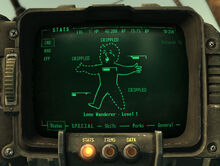