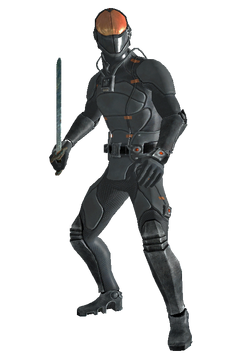 Crimson Dragoons are elite members of the Chinese Army who appear in the Anchorage Reclamation simulation in 2277.

Crimson Dragoons are China's special operations force and played a major role in defending Chinese territory in the Battle of Anchorage. According to rumor, they begin military training at birth. They use the Hei Gui stealth armor, an armor that cloaks their movement, making them nearly invisible. They favor sword fighting with a Chinese officer's sword instead of firearms, using their stealth capability coupled with their armor to go undetected and kill their targets rapidly and discreetly.

* When their bodies are searched via the console, Crimson Dragoons yield Brotherhood of Steel holotags.

Crimson Dragoons appear only in the Fallout 3 add-on Operation: Anchorage.

Historically, a dragoon is a type of infantry trained to fight on foot as well as on horseback, but eventually came to refer to a kind of medium cavalry. In modern parlance, the term is usually applied to armored regiments.

Retrieved from "https://fallout.fandom.com/wiki/Crimson_Dragoon?oldid=3095174"
Community content is available under CC-BY-SA unless otherwise noted.