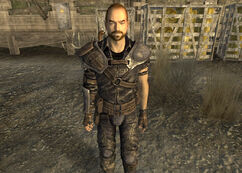 The boss of the local Crimson Caravan branch, Alice McLafferty, contracts these guards to provide security for the caravan's compound on the outskirts of New Vegas. Alongside the normal caravaneers, the guards sleep in guard barracks on-site. They are charged with protecting the company's assets and interests. They also accompany traders and their brahmin while on assignments out in the wasteland.

Some Crimson Caravan guards worked with the Van Graffs' hitmen to cripple the influence of smaller caravans in the Vegas area, such as Cassidy Caravans. Their bodies can be found among the wreckage of such caravans.

Heartache by the Number: Alongside Van Graff thugs, the bodies of dead Crimson Caravan guards can be found among the wreckage of sacked caravans.

The guards outside of the Crimson Caravan Company's walls may attack the Courier unprovoked. Leaving the cell and waiting for a period of time can periodically help to return the guards back to a neutral stance.

Retrieved from "https://fallout.fandom.com/wiki/Crimson_Caravan_guard_(Fallout:_New_Vegas)?oldid=3359894"
Community content is available under CC-BY-SA unless otherwise noted.