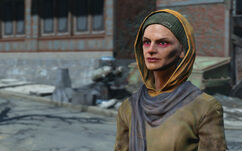 “I got so many flavors of mayhem for sale.”

Cricket is a traveling merchant operating in the Commonwealth in 2287.

Cricket is a roving weapons dealer, based out of Bunker Hill. She appears to be a rather heavy chem addict, as her gaunt appearance and spastic wavering tone of voice may suggest. The wares of her caravan include a well-chosen selection of melee weapons and firearms, among which is the legendary weapon Spray n' Pray. Her sales territory covers the southern portion of the Commonwealth, which includes Diamond City, Vault 81 and the Quincy area.

Cricket's caravan moves through the southern part of the map according to an apparently random route that varies each trip. Each trip may stop at, or simply pass any or all of the following locations:

These halts may be visited in any order and approached from a variety of directions. If trade caravan posts are built at player character-controlled settlements in the area, these may also be visited. At each of the halt locations, she will normally stop for 8 in-game hours.

In addition to these possible halts, the caravan may pass close to other locations (without stopping), including:

Hostile interactions are likely in many of these locations, and at random encounter points, if the player character is present.

If she is encountered as she leaves Bunker Hill, she will first transit to Vault 81, where her normal circuit then begins. Her transit route is quite complex. She leaves Bunker Hill by the east door like the other caravan merchants. Unlike the others, however, she heads south to the river, west along the north bank of the river to Monsignor Plaza, north through Cambridge to the Collegiate administration building, west to College Square, south back to the river, crosses the river at the wreck of the USS Riptide, passes Diamond City without stopping until reaching Vault 81. The transit route provides ample opportunities for hostile encounters.

If the player character fast travels back from another cell to the location where Cricket is currently halted (including Bunker Hill as well as her circuit stops) or sleeps in or near one of these locations, her departure will be delayed until shortly after they arrive, or wake up.

As with the other Bunker Hill traveling merchants, her appearances there are entirely random, and she will not leave Bunker Hill if the player character waits, only if they sleep or leave the cell and re-enter it. As such, it is possible to follow her out from, but not to, Bunker Hill from another cell.

Cricket appears only in Fallout 4.

Retrieved from "https://fallout.fandom.com/wiki/Cricket?oldid=3350704"
Community content is available under CC-BY-SA unless otherwise noted.