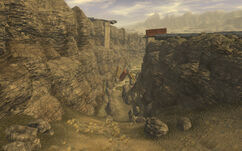 Crescent Canyon east is the eastern entrance to a gully below a collapsed bridge south of Mojave Drive-in in 2281.

Crescent Canyon east is the eastern side of a large crescent-moon-shaped canyon connecting with Crescent Canyon west, forming a natural barrier along the southern end of the map. It is populated by golden geckos and is strewn with radioactive waste barrels. A train (that was most likely carrying these radioactive waste barrels) can be found with half of its cars at the bottom of the canyon.

The canyon is irradiated and the Courier may require anti-radiation items and apparel in order to explore it. At the east end of the canyon, there is a hollowed-out rock at the bottom of the hill to the right.

There is an advanced radiation suit roughly half-way through the canyon, near an overturned truck in a marked case.

Crescent Canyon east is located in the same geographical area as the real world Crescent Canyon, below Crescent Peak in the McCullough Range of the Mojave Desert.

Retrieved from "https://fallout.fandom.com/wiki/Crescent_Canyon_east?oldid=3486299"
Community content is available under CC-BY-SA unless otherwise noted.