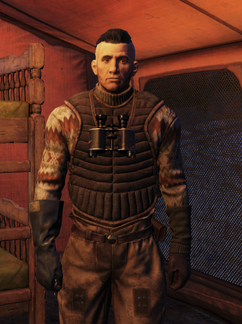 Creed is a raider in Appalachia in 2103.

After their parents died, Creed and his sister Barb survived together in the wasteland keeping each other alive. Eventually, both of them joined the Raiders sometime before their return to Appalachia.

Creed is well known in the Crater as both a coward[1] and a pushover.[2] He once stole chems from Ae-Ri but admitted to being the thief after being asked only three times.[3] He also stole some tools from Caleb Fisher to fix up a power armor suit he found but gave them back after being grilled, with Fisher also confiscating the power armor.[4]

Creed views his sister affectionately, despite her tendency to snitch on him. He also thinks of Axel as his best friend.[5] He dislikes Lev, after he made several passes towards his sister.[6]

From Russia With Lev - Creed can be interrogated, but he ultimately is not the snitch and doesn't know where Lev is.

Creed appears only in Fallout 76, introduced in the Wastelanders update.

Retrieved from "https://fallout.fandom.com/wiki/Creed?oldid=3418813"
Community content is available under CC-BY-SA unless otherwise noted.