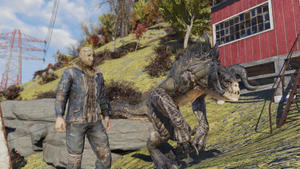 Creature taming allows players to tame a single specific creature, and then use it as a means to defend their C.A.M.P. alternative to traps and turrets.

Unlike previous iterations of taming, the creature in question cannot be controlled or directed like a traditional companion; once located at the player's camp, it will simply patrol and defend against hostile entities within a certain radius.

Due to the current lack of conclusive documentation, much of the information regarding creature taming is highly speculative and only information garnered from verified cases of successful tamings is added to this article.

Before going out to tame a creature, one should ensure they possess the following:

At the moment, the following creatures are known to be tameable:

While some creatures can be pacified by Animal Friend, creatures that can be tamed are actually a part of a specific random encounter. The creature in question exhibits a few qualities that can help identify them as part of this encounter:

Retrieved from "https://fallout.fandom.com/wiki/Creature_taming?oldid=3059611"
Community content is available under CC-BY-SA unless otherwise noted.