Creature taming allows player characters to tame a specific creature, and subsequently, use it as a means to defend their C.A.M.P. as an alternative to traps and turrets. Unlike previous iterations of taming, the creature in question cannot be controlled or directed like a traditional companion. At one's C.A.M.P., the creature will patrol and defend against any hostiles it detects, acting as defense, similar to a turret.

Only creatures encountered in the "Scene" category of special random encounters can be tamed. These creatures are easily identified by their passive nature. While most creatures in the wild will be hostile by default, tamable creatures will not.

The following are required to tame a creature: 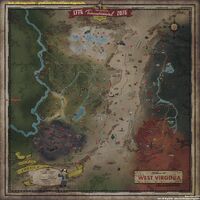 Tameable creatures may only spawn as part of a scene-encounter (marked in red on the map). These encounters may only occur if the player has the Animal Friend perk equipped upon triggering the encounter. The creatures will always spawn alone and unaggressive.

In order to tame a creature, one can approach it and select the "tame" prompt. Alternatively, a creature can be tamed at range by aiming-down-sights with either an iron or reflex sight. A firearm with a scope that has a zoom magnification will not work.

Once tamed, an additional prompt will appear to direct the newly tamed creature back to the C.A.M.P. Once confirmed, the creature will immediately traverse there and does not require an escort. Escorting the creature can result in it engaging hostiles along the way, potentially causing its death.

Community content is available under CC-BY-SA unless otherwise noted.
... more about "Creature taming"
RDF feed
Has platform
PC +, Xbox One +  and Playstation 4 +
Advertisement