The Creation Club is an officially supported venue for developers and modders to create and sell their content on Bethesda Softworks games, featuring in Fallout 4 and The Elder Scrolls V: Skyrim. Purchasing of the content is done in-game and purchased with Creation Club credits which are purchased with real-world money.[1] Creation Club was launched on August 29, 2017, for Fallout 4 in patch 1.10.

Creation Club is a collection of all-new content for Fallout 4 as well as The Elder Scrolls V: Skyrim. It features new items, abilities, and gameplay created by Bethesda Game Studios and outside development partners including community creators. Creation Club content is fully curated and compatible with the main game and official add-ons, meaning using Creation Club content won't disable achievements.

In spring 2015, Bethesda and Valve partnered to sell Steam Workshop content for The Elder Scrolls V: Skyrim and later on all Creation Engine games.[2] However, fans and modders alike reacted negatively to the announcement with many complaints leveraged against content creators only receiving 25% of the total profits and even more against the concept of paying for mods in general. 130,000 people signed a petition calling for Valve to remove paid mods. In no small part to the overwhelming negative backlash, Valve backed out and pulled support for paid Steam Workshop content a short time after its announcement.[3]

As noticed by many players, the Creation Club would automatically download all Creation Club content before a purchase was made depositing the files within their Fallout 4 game folder and using hard drive space. Bethesda acknowledged the problem and have been looking into a fix.[6] 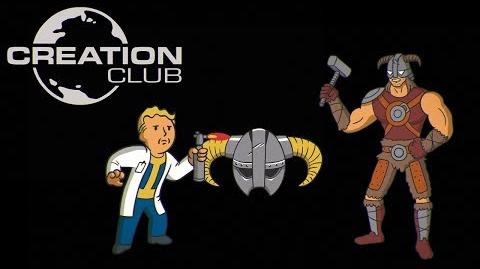 Credits are the currency used to buy Creation Club products. and can be bought on Xbox Live, PlayStation Network and the Steam store. On Xbox and Steam, credits can be used on both Fallout 4 and Skyrim Creation Club, but on PlayStation the games' Creation Club uses different credits per game due to technical limitations.

The following content has been discontinued and was only available for a limited time. It may be available again in the future.

All holotapes that are added via Creation Club content.

All notes that are added via Creation Club content.

During Creation Club's release, one of the future items was a recreation of the Mauler, a unique Auto axe from the Fallout 3 add-on The Pitt. The item was showcased on a Creation Club promotional image and was given a file, but due to animation issues, was shelved or cut.[8][9]

If one has too many Creation Club creations installed, it will result in the 0kb bug, in which the system will refuse to save and says that one must delete another application or video clip larger than 0kb. The only way to fix this is to uninstall the game and reinstall it, downloading only a limited amount of the creations at a time. [verified]