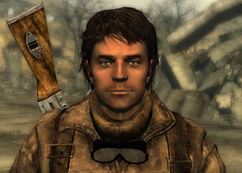 “I hear you're the one who's so deeply invested in my junk. Not as deeply as me, of course, but who is, really? I picked up some Stealth Boys the other day, and they seemed like just the way to thank you for your investment. Kudos!”

Retrieved from "https://fallout.fandom.com/wiki/Crazy_Wolfgang?oldid=1986259"
Community content is available under CC-BY-SA unless otherwise noted.