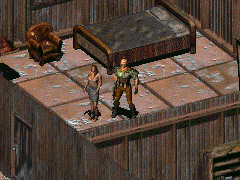 The crazed raider is a troubled raider in Junktown around 2161.

This crazed raider made his way to the Crash House, but found his experience with a prostitute named Sinthia to be extremely distressing after she laughed at him. He has now taken her hostage.

Work with the raider[edit | edit source]

The crazed raider will ask for a mere 100 bottle caps, and to be able to walk away unscathed from the kidnapping. This option will give the most Experience Points for the quest, and results in Sinthia becoming more 'friendly' with the Vault Dweller. However, to even get the raider to co-operate, a few Speech checks must be passed, and one may not insult or try to intimidate the raider.

Almost all of the normal dialogue options with the man result in him attacking, or if failing a Speech check. Any insult triggers this, but some options lead to him killing Sinthia first, making it impossible to finish the quest. In combat, he is about as strong as a normal Khan raider, wielding a 10mm pistol. A few results of killing him in combat are Sinthia's distaste in the player character's methods and the considerably smaller amount of experience earned for the quest. She will not speak to the Vault Dweller in case of this outcome.

Knock out the raider[edit | edit source]

It is also possible to knock out the raider with a sneak attack with him subsequently carried out of the room. This will result in Sinthia being skeptical of the Vault Dweller, but eventually calming down and offering her services later.

The crazed raider appears only in Fallout.

Retrieved from "https://fallout.fandom.com/wiki/Crazed_raider?oldid=3370699"
Community content is available under CC-BY-SA unless otherwise noted.