Fallout 3
“Moira sells all kinds of stuff at her place, Craterside Supply. Take a guess where it is? Heh heh heh heh.”— Lucas Simms

Craterside Supply is a store located in Megaton in 2277. It can be found by going right and following the path as soon as the Lone Wanderer enters Megaton.

The store opens at 8:00 AM and is owned by Moira Brown. Her stock, as well as her caps, refreshes on Mondays and Thursdays. The shop sells anything one might need, and as most of the Megaton settlers point out, usually at a good price. Speaking with Moira will grant the option of buying items, or starting the Wasteland Survival Guide quest.

Craterside Supply is guarded by a single mercenary, who upon interaction, replies he is "watching [the visitor]." During her quest, he might say to "leave him out of that girl's crazy experiments" as he "does not get paid enough for that," referring to the help the Lone Wanderer is giving Moira. Any negative interaction with Moira, such as getting caught stealing or injuring her, will lead to the mercenary turning hostile and retaliating.

By 2297, the store lives on under Moira's ownership and is the hub of the Wasteland Survival Guide distribution network.[1]

On the right upon entry, the counter is just beyond the entrance, with an armored Vault 101 jumpsuit behind it and a locker that contains some of Moira's inventory, but it cannot be lockpicked. Moira's terminal with a Very Easy lock is directly to the left, containing information on Moira's other experiments.[2]

Near that is another fully stocked locker which can also only be opened with Moira's key. On another side, the mercenary stands with his back against the wall alongside a workbench and a doorway. Walking through the doorway leads to the stairway and the bed owned by the mercenary.

Craterside Supply appears only in Fallout 3.

A pre-release shot of Megaton, with the Craterside Supply in the background. Note that the plane part on top of the shop doesn't have the SUPPLY sign yet. 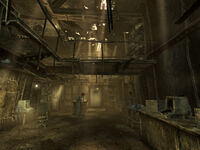 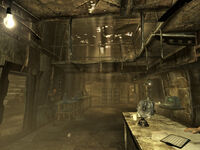 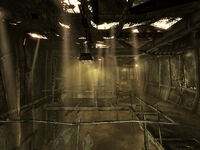 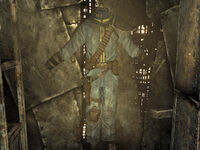