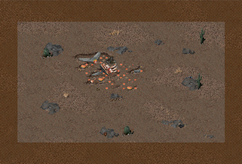 "This whale appears to have fallen from a great height."

The Hitchhiker's Guide to the Galaxy.

Crashed whale is a special encounter in Fallout 2.

For those of you who ever wanted to know what a whale shouldn't look like, this is it. Apparently the normally aquatic creature was dropped from a height of around 300 miles, and came into contact with terra firma like an egg on a kitchen floor, only with more whale meat involved. Also present is a pot of daisies. Aren't they nice?

This grisly tableau was taken from Douglas Adams' book The Hitchhiker's Guide to the Galaxy. A pair of nuclear missiles fired at a starship in low orbit around the planet Magrathea were, through the power of the Infinite Improbability Drive, transformed into a rather surprised sperm whale and a bowl of petunias. The whale experienced a brief journey of existential discovery before rather violently encountering the ground while the petunias merely thought, "Oh no, not again." 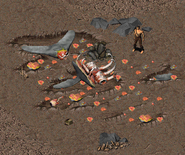 Add a photo to this gallery
Retrieved from "https://fallout.fandom.com/wiki/Crashed_whale?oldid=2208294"
Community content is available under CC-BY-SA unless otherwise noted.