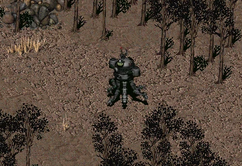 “This is wreckage from a verti-bird. Looks like it crashed here months ago.”

The crashed vertibird robot is a hostile Mister Handy unit from an Enclave Vertibird that crashed near the town of Klamath.

The robot sustained a great deal of damage in the crash. Its surface is covered with dents, scratches, mud, and broken wires.[1] The robot's electronic brain is damaged and all of the lines it speaks come from various science fiction movies (e.g. "I'm sorry Dave." or "Gort! Klaatu Barada Nikto!").

For reasons unknown, the Mister Handy unit can occasionally be found non-responsive to the presence of the Chosen One, making it possible to carry out repairs. Afterwards, it will refrain from both attacking and referencing science fiction.

The crashed vertibird robot appears only in Fallout 2.

Retrieved from "https://fallout.fandom.com/wiki/Crashed_vertibird_robot?oldid=3329957"
Community content is available under CC-BY-SA unless otherwise noted.