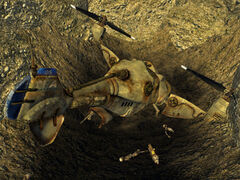 “A vertibird. Interesting. It's been a long time since I've seen one of these.”— Arcade Gannon

The crashed vertibird is the wreckage of an Enclave vertibird, located east of the old nuclear test site and south of Matthews Animal Husbandry Farm in the Mojave Wasteland in 2281.

A vertibird with serial number VEM-105 2193 rests at the bottom of a large crater. Hostile hardened sentry bots and/or hardened Mister Gutsies are nearby. Feral ghouls may also roam on the outskirts. A few skeletons and the Tesla-Beaton prototype are near the wreckage.

The crashed vertibird appears only in Fallout: New Vegas.