The Valiant-1, known as the crashed space station in-game, was a United States Space Administration space station that once orbited Earth before the Great War.

Sometime prior to entering deep sleep in 2070, astronaut Sofia Daguerre spent some time on the station.[1] Left in orbit after the Great War, the space station fell back to Earth and crashed in the former state of West Virginia, in the area known as the Toxic Valley.

In 2103, the station's wreckage was fortified by Meg Groberg's Raiders and used as their headquarters, renaming it to the Crater. One of the raiders, Caleb Fisher, managed to access the station's computers. According to his analysis of surviving documents from the wreckage, they were building a device in the space station. Dubbing it the "Space Beam" project for lack of better words, Fisher doesn't know if it was some kind of weapon or communications system, since there was a lot of missing information, and it will probably take him years to figure it out.[2]

Valiant-1 is a circular space station designed like an orbiting wheel. At the center was the command core (which was later converted into a raider encampment), where the main base of controlling the station was present. The module is then connected via connection tubes towards the rotating ring. These rings, such as Airlock C7, contained cargo and pressurized doors to allow spacecraft to dock on Valiant-1.

The crashed space station appeared in Fallout 76, and was expanded in the Wastelanders update.

According to level designer Steve Massey, the crashed space station was selected as the site of the Raiders' settlement as the team had always wanted to do more with the space station since the game's initial release.[3] 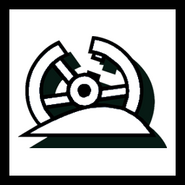