“In the river, there's a twisted pile of metal and glass, all full of bones. Joshua says they were scouts, but they looked awful small to me.”— Follows-Chalk

The crashed scout bus, also referred to as "where the little ones fell" by Follows-Chalk, is a location in Zion Canyon in 2281.

The crashed scout bus is a Boy Scout bus that fell off the highway and crashed into a small creek-like area, killing the Scouts it was carrying and their caretakers. Upon impact, the bus split in two, tossing everyone and everything around. In total, eighteen people died: sixteen Boy Scouts, a Scout Master, and the driver.

The force of the crash, and the split in the bus's frame, deposited some of its occupants and their possessions in the creek bed. Most of both remained inside the bus, however, including a quest-related, broken (but repairable) compass.

The childrens' skeletons are actually downsized adult skeletons as evidenced by their incorrect proportions. 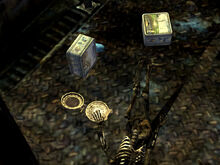 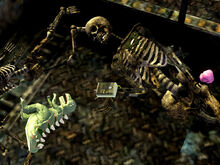 The compass sensor module
Add a photo to this gallery
Retrieved from "https://fallout.fandom.com/wiki/Crashed_scout_bus?oldid=3309103"
Community content is available under CC-BY-SA unless otherwise noted.