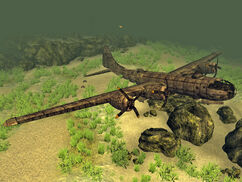 The crashed B-29, dubbed The Lady in the Water or The Lady by the Boomers,[1] is a Boeing B-29 Superfortress that crashed on July 21, 1948 (129 years before the Great War) and is now lying at the bottom of Lake Mead, close to Lake Mead Cave and Callville Bay.

During the quest Volare! the Boomers request the Courier float the bomber up to the surface of the lake, using two ballasts provided by Loyal. The ballasts must be placed between the engines under each wing. After floating it up to the surface, Loyal sends robots to disassemble it and bring it back to Nellis hangars. Once taken to the hangar, it can be seen being re-assembled and restored by the Boomers.

The crashed B-29 appears only in Fallout: New Vegas.

The crashed B-29 is a real world crash site, referencing a Boeing B-29 crashing into Lake Mead on July 21, 1948 - the same date in-game and in real life. The site was added to the National Register of Historic Places in April 2011.

Floating on the surface 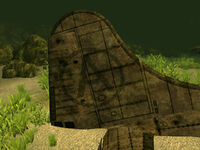 497th bomb group insignia on the crashed B-29 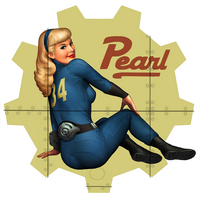 GECK render
Add a photo to this gallery

Retrieved from "https://fallout.fandom.com/wiki/Crashed_B-29?oldid=3425054"
Community content is available under CC-BY-SA unless otherwise noted.