The Cranberry Bog is one of the six regions of Appalachia.

Cranberry Bog refers to the area in the southeastern part of Appalachia, roughly bounded by the Appalachians in the west and the Shenandoah/Potomac watershed to the north. Officially named as such by pre-War authorities,[1] it took its name from the colorful red floras in this corner of West Virginia, including cranberry, pitcher, and sundew plants.[2] Watoga was founded in the heart of the Bog, to act as the city of the future in 2042, with intensive clear-cutting and drainage operations continuing for the next nearly four decades. The ecological catastrophe and the expansion of Watoga did not begin in full until the 2070s when the project was transformed into as a joint effort between the United States government, RobCo and Atomic Mining Services to build a "city of the future." All public services in Watoga were designed to be completely automated, including a full staff of custodial and security robots.[3]

Apart from the destruction of the natural environment, Watoga also had a deleterious impact on the existing residents of the Bog. Unable to afford living space in Watoga itself, they were either displaced by the ever-expanding city full of affluent elitists or forced out by AMS goons.[4] It followed a pattern of general misery established by Allegheny Asylum, which gained notoriety following the Charleston Herald's revelation of routine patient mistreatment at the facility and was shuttered in 2061.[5] The Atomic Mining Services corporation also used the region as its own personal sandbox, experimenting with subterranean nuclear detonations to generate ultracite and shifting the cleanup cost and fallout to the hapless residents and companies.[6]

The Great War affected the region badly. Watoga, an autonomous city and a natural hub for reconstruction, was hit by a destructive computer virus shortly before the Great War, forcing the population into a desperate flight into the countryside. The nuclear war prevented any proper response from the authorities, with the refugees scattering into the surrounding regions, many of them holing up at the closed-down asylum.[7] Other survivors of Appalachia avoided the Cranberry Bog more than any other region, and only the most well-equipped dared to travel here, aided by stories of the asylum.[8] The isolation of the region made it the perfect candidate for Thomas Eckhart's secretive experiments. It was here that he had the scorchbeasts locked away below ground to act as his failsafe and here that he unleashed them upon Appalachia in 2085.[9][10]

While the Enclave was wiped out by internal conflict, the Bog had yet a role to play. By 2085, the Appalachian Brotherhood of Steel was already well established at the asylum, inheriting it from the previous residents. Fort Defiance, as it was called, became the nucleus of their expansion and operations. When the Scorched threat became apparent, it also became the center of their defensive network on the edge of the Bog. Although the Brotherhood failed in their efforts in 2095, following the loss of Paladin Taggerdy and nearly all standing personnel, their automated SAM stations continued the fight, buying Appalachia time until Vault 76 Vault Dweller emerged on Reclamation Day and confronted the scorchbeasts on their own turf - saving humanity from extinction.[11]

The Cranberry Bog is in the southeastern portion of Appalachia. The survivors of Appalachia avoid the Cranberry Bog due to the sheer number of dangerous creatures and locations. Visitors to the area avoid the Allegheny Asylum in particular, due to disturbing tales about the former hospital, which was originally built in the mid-1800s as a treatment facility for the mentally ill. Farther into the Bog, Watoga was built as a joint effort between the United States government, RobCo and Atomic Mining Services to build a "city of the future." All public services in Watoga were designed to be completely automated, including a full staff of security robots. Sometime after the bombs dropped the area was claimed by the Appalachian Brotherhood of Steel. There are several abandoned Brotherhood of Steel outposts and ASAM sites littered throughout the region that were used in operations against the Scorched. Due to the prime fissure being located here, as well as being the birthplace of ultracite, there are a large number of Scorched and scorchbeasts in the region. All of the Brotherhood of Steel faction events take place here.

The region contains the following locations:

“This is a delightfully named region, but one that belies the high-level horrors that await those attempting to navigate the wetlands that encompass the southeastern parts of Appalachia. You'll be seeing more than red as you visit the dilapidated farms, groves of huge and possibly carnivorous Sundew plants (now bigger than a house), and radiation-soaked, water-filled quarries interspersed by small Brotherhood of Steel forward operation camps. These are the only places that may offer a chance to rest (as many have their own turret defenses you can utilize). Use the web of bog channels that crisscross this entire region, which consists of narrow grooves cut into the bog that aren't quite shallow enough to climb out of (except at certain junctions); though these passageways are confining, they can reveal their own share of secrets, including a tunnel that runs under the main highway from Watoga to the Abandoned Bog Town. Aside from Fort Defiance, there is an old asylum now recently commandeered by the Brotherhood of Steel. The dominant location in these parts is the city of Watoga, where an attempt was made to automate every aspect of life but is now a wild west of rogue robots, looming skyscrapers, and Scorchbeast nests.”— Fallout 76 Vault Dweller's Survival Guide p.477
“The colorful red floras of Cranberry Bog were originally West Virginia’s naturally occurring cranberry, pitcher, and sundew plants. The survivors of Appalachia avoided the Cranberry Bog more than any other region, and only the most well-equipped dared to travel here, not least because of the stories told about the Allegheny Asylum, which was originally built in the mid-1800s as a treatment facility for the mentally ill. Farther into the Bog, Watoga was built as a joint effort between the federal government, RobCo, and Atomic Mining Services to build a “city of the future.” All public services in Watoga were designed to be completely automated, including a full staff of security robots.”— Fallout 76 Vault Dweller's Survival Guide

The Cranberry Bog appears only in Fallout 76.

The Cranberry Bog is based on the real world location of Cranberry Glades, in Pocahontas County, West Virginia. Lead artist Nathan Purkeypile stated that the area was one of his favorites from his time scouting out West Virginia for the game.[12] 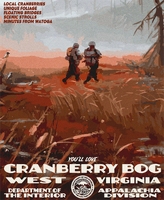