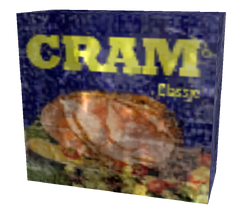 Cram is a food item found in Fallout: New Vegas.

Cram is processed meat from before the War,[Non-game 1] found in blue tin boxes. They were useful rations during World War II, and many NCR troops can be seen with Cram as rations in Fallout: New Vegas.

Cram restores 5 Hit Points but also gives a small amount of radiation in the form of 3 rads. In addition, it is used in the recipes for caravan lunch and fire ant fricassée.

Even though this food item is depicted as being packaged in a box, there is a weapon that implies there are other Cram products sold in cans.

Cram's presentation is a parody of Spam, down to the same style of packaging and font. In Fallout 3 and Fallout: New Vegas, it was shown to come in a cardboard box, instead of Spam's signature tin can. In Fallout 4, its container was changed to a tin can full of the meat substance with a pull tab to open the container, further likening it to its real-world counterpart.

When you hotkey Cram, it shows up as the Big Guns sign. [verified]

Retrieved from "https://fallout.fandom.com/wiki/Cram_(Fallout:_New_Vegas)?oldid=3493715"
Community content is available under CC-BY-SA unless otherwise noted.