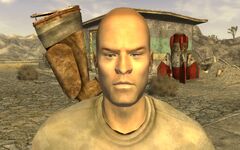 Boone without his beret and sunglasses

“Life has a way of punishing you for the mistakes you make.”

Craig Boone is a retired NCR 1st Recon sharpshooter and Novac's night-shift town guard in 2281. He is also a possible companion.

Born in 2255, Craig Boone joined the New California Republic Army at an unknown date and served until some time after the Bitter Springs Massacre.[2] He completed the majority of his Army service with the 1st Reconnaissance Battalion, an infantry unit which has a reputation for having the best marksmen in the NCR Army.

In 2278, Boone was present with the rest of the 1st Recon at the Bitter Springs Massacre. At the direction of the major in command, an NCR Army force surrounded Bitter Springs and took up positions to ensure no one could leave. The Great Khans occupying Bitter Springs were not the well-armed force of raiders and warriors that the major had anticipated. Many of the Khans were non-combatants, including women, children, the elderly, the wounded and the sick. Confused about what to do, NCR troops radioed command to confirm their orders. Command reaffirmed their order to fire upon everyone, and the NCR force followed those orders. Then-Captain Dhatri, the second-in-command of the NCR force, took command after the major froze up, and did what he could to stop the killings. Bad planning and poor communication from up-top, in Boone's view, caused the massacre.[2]

Sometime after Bitter Springs, Boone was discharged from the NCR Army, but not before meeting a woman named Carla while on leave.[3] Carla was the only thing in the world who made him feel calm and happy in life. When he listened to her, she made him forget about everything he did in the military. He left the military, married Carla, and moved to Novac at the invitation of his 1st Recon friend, Manny Vargas. It was apparent that Carla was not pleased with living in Novac and made her opinions known. Jeannie May Crawford describes Carla as a "cactus flower," in that she is pretty to look at, but hard to get close to. She was never content with the ordinary life of the small town. Carla's attitude toward the town caused distance between Boone and Manny, which continued after Carla's disappearance. She had been kidnapped by the Legion, and Boone suspected she was betrayed by one of the townsfolk.

When Carla was kidnapped, Boone tracked the slaving party to Cottonwood Cove in hopes of rescuing her, only to find her being auctioned off in a camp of hundreds of Legion soldiers. All Boone had was his rifle and the distance between them. Instead of subjecting her to the horrors of Legion slavery, he chose to take her life in a mercy killing, knowing that a rescue wasn't possible. As a result of the psychological trauma Boone endured, he has become suicidal. He has no goal, purpose, or desire in life but to slaughter legionaries until fate finally catches up to him.

When the Courier first meets him, Boone is bitterly whiling away the hours until he can find out who is responsible for the disappearance of his wife and killing them. Hardened and psychologically troubled from his time in the NCR military, Boone vacillates between being a stone-cold killer and a decent human being. Venturing out from the relative safety of Novac brings Boone into close contact with his old life until he is forced to deal with the tragic events that caused him to leave the military.

Craig Boone, despite being out of the NCR military, is still an NCR soldier at heart. He refuses to work with a terrorist against the NCR and will not tolerate the Courier working with Caesar's Legion. In fact, if the Courier enters the Fort with Boone, all Legion members will become immediately hostile, regardless of the one's previous standing with them.

Boone, near the gas station in Novac

Boone, together with Manny Vargas on the playing card

Concept art, Behind the Bright Lights & Big City
Add a photo to this gallery

Retrieved from "https://fallout.fandom.com/wiki/Craig_Boone?oldid=3485364"
Community content is available under CC-BY-SA unless otherwise noted.