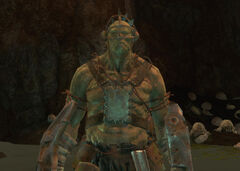 Crag is a deceased super mutant in Nuka-World in 2287.

Crag can be found dead by the Sole Survivor during their trek through the Nuka-World gauntlet, having met his end in a mirelurk-infested water pit. He had traveled to the amusement park in an attempt to kill the raiders housed there, and make the best meat bag from their bodies.[1]

Crag appears only in the Fallout 4 add-on Nuka-World.

Retrieved from "https://fallout.fandom.com/wiki/Crag_(Nuka-World)?oldid=3398139"
Community content is available under CC-BY-SA unless otherwise noted.