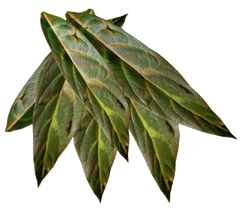 Consuming this item gives a +1 boost to Perception and Agility, and a -30 to Sleep in Hardcore mode. It is possible to become addicted to this item, the effects of which are a -1 to Perception and Charisma. With the addition of the Honest Hearts add-on, this item is also used to brew black coffee.

Retrieved from "https://fallout.fandom.com/wiki/Coyote_tobacco_chew?oldid=3490772"
Community content is available under CC-BY-SA unless otherwise noted.