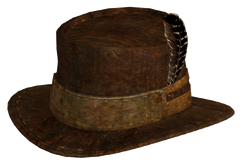 The cowboy hat is a piece of headwear in Fallout: New Vegas.

All variants have a Damage Threshold of 1, and provide a bonus of 1 to Perception, as they shield the wearer's eyes from the sun. They can be repaired with pre-War hats, other copies of themselves, as well as any other head item with the Jury Rigging perk.

A straw cowboy hat with a wide, slightly curved brim, a slightly indented top, and a ring of vents halfway up.

A black cowboy hat with a large brim, curved to the sides, and a thin white band at the base.

A brown top hat with a thin flat brim; with a black-and-white feather stuck in a large rust-colored band at the base.

A straw cowboy hat with a wide brim, curved to the sides, indents in the top and at the temples, and a thin black band at the base.

A light brown uncured leather cowboy hat with a slight peak, a thick, flat brim, and a thin black band at the base.

With the rattan and desperado cowboy hats, when the player attempts to equip it through a hotkey, it will freeze the game. [verified]

Retrieved from "https://fallout.fandom.com/wiki/Cowboy_hat_(Fallout:_New_Vegas)?oldid=3240447"
Community content is available under CC-BY-SA unless otherwise noted.