19h
“The Vault has received word of a TV pilot filming nearby. It's almost certainly a trap, but send your most physically attractive Dwellers dressed for the part just in case.”

CoveWatch! is a single stage overseer quest in Fallout Shelter. 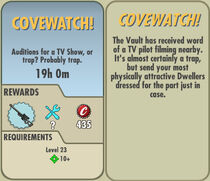