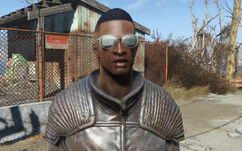 X6-88, a typical Courser in the Commonwealth

The Institute
The Commonwealth

“Coursers are Institute synths, designed for one purpose. They're hunters. Operations go wrong, a synth goes missing, and a Courser is dispatched. They're very good at what they do.”— Brian Virgil

Coursers are assassins and elite synths designated to carry out specific surface missions from the Institute. They operate around the Commonwealth in 2287.

The Coursers are designed to be elite killing machines, unlike others of the synth 'race'. They are noted by the Railroad and the Institute to be exceptional even for synths, as they possess exceptional strength, combat prowess, awareness and endurance. They are widely feared by the Railroad, as their first instinct when they see a Courser is to cease all operations and remain low.

It is stated by several members of the Railroad as well as Justin Ayo that Coursers are designed to be smarter, faster, stronger and more perceptive than the average combat synth. They are equipped with the best equipment the Institute has to offer and often lead earlier model synths into battle. Other times, however, they can serve as spies in big cities or small settlements and oftentimes when operating in this manner they work with other Coursers, who then funnel the gathered intelligence back to the Synth Retention Bureau.

While the training program that Coursers are put through is not described in detail, Justin Ayo claims that coursers are taught armed and unarmed combat, disguise, infiltration and mechanical skills. It is implied to be strenuous both physically and mentally, as Ayo himself states that most synths who are considered eligible for the program drop out within the first few days due to the physical costs of the program. In addition, the fact that Coursers have been spotted standing around dozens of dead bodies without any signs of emotion implies that Coursers are stripped of their emotion in order to effectively carry out orders without question from their SRB masters. However, the Sole Survivor can travel with a Courser, X6-88, and after gaining max affinity with him, he seems to have a sense of sarcastic humor and admiration for his master, implying that they can relearn the emotion that the Courser program denied them if they remain on the surface for too long.

While for the most part, the Coursers work as either a synth retrieval unit or a squad leader, they have also been known to operate as a type of "hitman" for the Institute. While observing Conrad Kellogg's memories, X6-88 can be seen giving Kellogg information on Brian Virgil, which implies runaway scientists and other former non-synth Institute personnel are assassinated by Coursers or those under the watch of the SRB, as it can be seen with Kellogg. Brian Virgil even states although he ran away from the Institute some time ago, he fears sooner or later, a Courser will find him and he has thus prepared using a defense system of turrets and a military Protection unit, even though he's right in the middle of the Glowing Sea. He's exceptionally afraid of them, simply stating about Coursers that "they're very good at what they do."

Coursers typically fight under the cover of Stealth Boys, which can confuse the opponent and make the courser harder to fight. They use stimpaks to heal themselves if injured.

Some, but not all coursers, have a stern look on their face with a monotone voice. With the exception of Chase, all coursers encountered are male, though with different facial styles.

The Synth Retention Bureau is the main organization that the coursers work for. They are the ones who assign coursers their missions and provide access to the surface via relay from their courser chip, a form of teleportation. The SRB primarily uses Coursers to retrieve and reset escaped synths, with deadly efficiency.

According to Justin Ayo, Coursers are trained from Generation 3 Synths, though not all trainee Coursers pass. Those who pass will be inducted as Coursers, while those who fail will have their memory about the training wiped and reassigned.

Coursers in Synth Retention Bureau
Add an image to this gallery
Retrieved from "https://fallout.fandom.com/wiki/Courser?oldid=2714347"
Community content is available under CC-BY-SA unless otherwise noted.