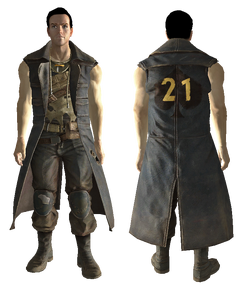 “If war doesn't change, men must change, and so must their symbols. Even if it is nothing at all, know what you follow, Courier...just as I followed you, to the end. Whatever your symbol...carry it on your back, and wear it proudly when you stand at Hoover Dam.”— Ulysses, Lonesome Road

The Courier duster is a piece of clothing in the Fallout: New Vegas add-on Lonesome Road.

The Courier duster is visually identical to Ulysses' duster and shares the same DT of 13 and weight of 3. Each duster has a unique effect that raises a SPECIAL stat by one and raises a derived statistic a considerable amount.

At the entrance of the canyon wreckage, in the footlocker after completing Lonesome Road. 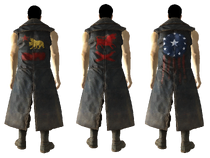 Courier duster in an endings slide