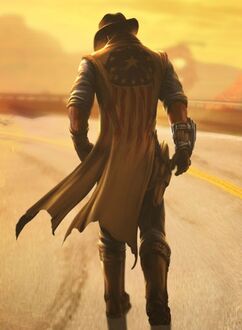 “Thought carrying that Chip would end you, no... you got lives in you, hard to kill. Storms, bullets... sand and wind, yet still you walk. For now.”— Ulysses to the Courier

The Courier, also known as Courier Six, is the player character and main protagonist of Fallout: New Vegas.

“Your face does the thinking - two to the skull, yet one gets up. Odds are against you... but they're just numbers after the two-to-one.

You're playing the hand you've been dealt, but you don't let it rest, you shuffle and stack, and a gamble... a gamble that may pay off? But how?

Most of the Courier's past is shrouded in mystery. What is known is that sometime before taking the fateful contract to deliver the platinum chip, the Courier lived as a drifter, earning a reputation as a veteran of the trail who had traveled all over New California (according to Ulysses the Courier has been to Circle Junction, New Reno, Vault City, Fort Abandon and on brahmin drives at the Big Circle).[1] Yet the Courier had some sort of connection to the budding community of the Divide in southern California (Ulysses claims that the Courier regularly traveled through the area, and contributed a great deal in keeping it alive).

After the New California Republic attacked and sacked Navarro, they recovered a piece of tech they did not fully understand, but they recognized several symbols (such as the Old World flag). They later linked these symbols to similar markings they saw in the Divide. The Courier took on the job to return it there, perhaps because the markings reminded them of home. But after making the delivery, the package turned out to be a detonator that contained missile launch codes. According to Ulysses, the package "woke up" and sent the detonation signal to missiles locked in the silos, resulting in massive earthquakes and powerful storms wiping out the community in its infancy, leaving Ulysses as the only survivor.[2] The Courier was apparently not present when the destruction happened, and therefore did not know of it.

In 2281, the Courier was one of six messengers hired by the Mojave Express to deliver packages to the New Vegas Strip, with the Courier carrying the parcel containing the only item of worth: Robert House's platinum chip, delivering it all the way from near Hub, California.[3] The Courier got the job after Ulysses pulled out when he learned that the Courier's name was next on the list. The Courier was intercepted by Benny, who then shot the Courier in the head twice and left them for dead, buried alive in a shallow grave in the Goodsprings cemetery. The Courier was dug out by Victor, a friendly Securitron under Mr. House's control. The Courier was then nursed back to health by Doc Mitchell, the resident doctor of Goodsprings.

The player character can make several suggestions about their past through in-game dialogue options. Since these are, as the name suggests, optional, it can be assumed that these are down to one's choice and as such, do not form part of their background until they have been selected. Below is a non-exhaustive list of elements of the character's past which can be explicitly expressed during gameplay:

This section is transcluded from Lonesome Road endings. To change it, please edit the transcluded page.

The Courier appears in Fallout: New Vegas and all of its add-ons. They are also mentioned in the graphic novel, All Roads.

Originally, the player would have been able to choose the Courier's race. Obsidian planned for the options of human, ghoul and super mutant; however, Bethesda strongly advised against on the bases of reworking armor and weapons for each race. Obsidian followed Bethesda's advice and left the Courier human.[6]

The Courier being dug out of their grave by Victor

The Courier's grave being dug in Goodsprings Cemetery

The Courier walking into the wasteland

The Courier on the playing card

Default appearance of the Courier
Add an image to this gallery

Retrieved from "https://fallout.fandom.com/wiki/Courier?oldid=3345654"
Community content is available under CC-BY-SA unless otherwise noted.