The Cottonwood Cove storage building is a small nondescript storage facility utilized by the Legion. There are several lockers, shelving units containing ammunition, two gun cabinets, and a reloading bench.

At night, the entrance to the building will be marked as owned. During the day, or when Canyon Runner is not in the building, it is marked as unowned. 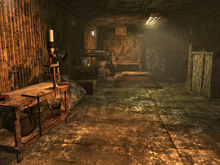