Fallout: New Vegas
“Believe me, I would love orders to take Cottonwood Cove apart and kick the Legion back across the river. But, the brass at McCarran doesn't want us to waste resources on something they consider a minor target. So we just get to watch.”— Green

Cottonwood Cove is a location in the Mojave Wasteland which acts as a staging area for Caesar's Legion in 2281. It is located along the Colorado River, southeast of Ranger Station Echo.

Once a small resort, Cottonwood Cove was adopted by the Legion as an outpost, used for trafficking captured people to Arizona for slave processing and as a launching point for all Legion raiding operations in southern Mojave.[1] It has since become the largest single encampment of Legion forces on the western side of the Colorado River and is their foothold into Nevada, using the river to transfer troops and supplies to Fortification Hill on the east bank.[Non-canon 1] This was made possible by the sabotage of Camp Searchlight, organized by Vulpes Inculta.

When the camp fell and the NCR's presence in the region waned, an outpost was set up at Cottonwood Cove to handle all Legion operations in the area.[2] All communication to and from Cottonwood Cove is handled via ham radio. Centurion Aurelius of Phoenix is stationed here as commander. With two contubernia at his command, his forces have killed and captured over four times his own number in NCR soldiers.[3] He describes the camp's presence as modest, but adds that even though it is "a single finger of the Legion reaching across the river's narrows," his forces equate to "an iron knuckle."[2]

The Legion camp is concentrated among the former resort buildings on the edge of the bay. Legionaries patrol the area around the buildings and up to the edge of the resort, near the welcome sign adorned with heads on pikes, while Legion explorers accompanied by Legion mongrels cover the entry points.

There is a hollowed-out rock to the left of the fast travel point to Cottonwood Cove. The rock will be marked with the phrase "the sun is killing me" and is located in the path between the two crucifixes. Centurion Aurelius of Phoenix maintains his command post at the headquarters set up in the concrete building overlooking the bay, with legionaries quartered in red tents surrounding it. Most of the resort buildings are boarded off, with the exception of the mess hall. A shack set up by the overlook is used as a supply dump.

The Cottonwood overlook overlooks the area, and contains a truck leaning over the cliffside. One can elect to dump the radioactive contents from the transport truck into the camp below, killing all occupants. This action will not deny access to the Fort. Cursor Lucullus will wear a radiation suit, and if he is otherwise dead, the Courier can take the barge independently. A Lockpick skill of 50 is required to open up the back of the truck.

Craig Boone will warn the player character on approach that he will start shooting anyone wearing Legion red. Clearing the camp out with Boone in tow advances Boone's story. Electing to nuke the Legion during Lonesome Road will activate the boat to Dry Wells at the cove. 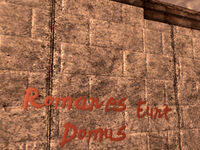 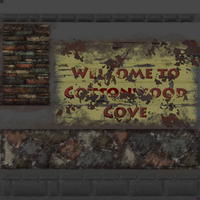