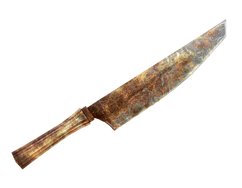 The cosmic knife super-heated is a weapon in the Fallout: New Vegas add-on Dead Money.

The cosmic knife super-heated was accidentally discovered by a chef, when one was left on a hot (450 degrees) stove under a pot for five minutes. The alloy retained so much heat that the blade glowed red-hot. The handle was safe to hold, but when the chef put it down on a table, it melted through.[1]

The cosmic knife super-heated appears as an ordinary cosmic knife with an orange glow. It will set enemies on fire for a brief period when a critical hit is made. It also has a significantly higher critical multiplier than the other variants, as well as bonus limb damage.

It has a special attack called Flambé Cut, which does 90% damage in V.A.T.S. and deals an extra 2 points of fire damage per second, for 5 seconds (requires a Melee skill of 50).

It is possible to execute Flambé Cut outside of V.A.T.S. (without the required Melee skill of 50 to perform the move) by initiating a power attack (hold attack button) while moving forward.

The cosmic knife super-heated can successfully strike about 745 times from full condition before breaking.

This weapon must be crafted by the player character. It cannot be found on enemies or in containers. The required schematics are on a locked terminal (Science 25), in the utility room in the center of the executive suites floor of the Sierra Madre Casino & Resort.

The weapon has a very high critical multiplier of x5. This fact alone makes the cosmic knife super-heated a very powerful weapon. A player character with a critical chance of 20 or higher would score a critical strike on every hit. This can be achieved very early by having Finesse, 10 Luck, and the 1st Recon beret.