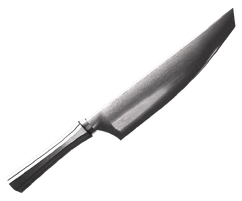 The cosmic knife clean is a weapon in the Fallout: New Vegas add on Dead Money.

The cosmic knife clean is a melee weapon almost identical in appearance to the standard variant, except all the Cloud residue has been cleaned off, revealing a smooth, shiny blade.

The cosmic knife clean's chief benefit is that it inflicts triple damage on limbs, twice that of the unclean original and nearly twice that of the super-heated version. It also features slightly higher base damage and critical chance.

It has a special Surgical Strike attack, which does 150% damage in V.A.T.S. at the cost of 5 more action points (requires a Melee skill of 50).

It is possible to execute Surgical Strike outside of V.A.T.S. (without the required Melee skill of 50 to perform the move) by initiating a power attack (hold attack button) while moving forward.

The cosmic knife clean can successfully strike about 995 times from full condition before breaking.

This weapon must be crafted by the player character. It cannot be found on enemies or in containers. This weapon is also used in the crafting of the knife spear clean.

The cosmic knife clean is not affected by the Cowboy or Super Slam! perks. [verified]