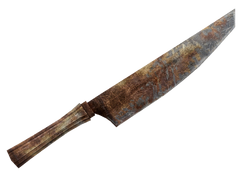 The cosmic knife is a weapon in the Fallout: New Vegas add-on Dead Money.

Made from a "space age" Saturnite alloy in the Big Mountain Research and Development Center, cosmic knives were advertised to be super-sharp, all-purpose kitchen knives that would not chip or dull. A surplus of these knives were shipped to the Sierra Madre Casino & Resort kitchens in preparation for the Gala Event. Though lightweight and durable, they proved to be too sharp for their own good, able to cut a person's thumb off if they were careless and even slice through cutting boards with no effort.[1] Concerns were raised about the safety and necessity of having so many of these knives lying about, but Frederick Sinclair insisted that only the best equipment be used.[2]

They were also found to have incredible heat retention, able to stay super-hot for hours after being heated over a stove. However, they are much more brittle when heated, and if left on an uninsulated surface, they would melt right through.[3]

Following the Great War and prior to the events of Dead Money, many of these knives found their way into the hands of the ghost people who stalk the streets of the Villa, who assembled them into makeshift spears to use as weapons against any unfortunate visitors.

“The alloy that makes up the Pre-War kitchen knives is unknown, and seems to have decayed in contact with the toxic cloud.”— Loading screen

The cosmic knife is particularly effective against limbs, where it inflicts a 50% damage bonus. Using Abraxo cleaner, one can turn it into a clean cosmic knife, which deals even more damage. They are stained a dark purple before they are cleaned, most likely due to years of exposure to the cloud. The name "cosmic knife" is a brand name only, referring to the "space-age" Saturnite material it is made of, not because it originates from outer space.

It has a special Back Slash attack, which does 70% damage in V.A.T.S. at the cost of 4 fewer action points (requires a Melee skill of 50).

The cosmic knife can successfully strike about 745 times from full condition before breaking. 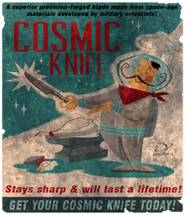 A pre-War ad for the cosmic knife