The Corvega factory is a location southwest of Vault 108 in the Capital Wasteland.

Before the Great War, this Corvega facility manufactured vehicles used throughout the United States. In 2277, it is home to a colony of giant ants.

The factory is inhabited by giant ants and contains the bodies of various mercenaries and raiders who failed to reach the colony's queen. A small number of feral ghouls may also be found in the factory. At the southern end of the factory is a giant ant queen, who can be killed for her pheromones. The ants and egg clutches in the factory contain a large amount of ant meat.

The Corvega factory appears only in Fallout 3. 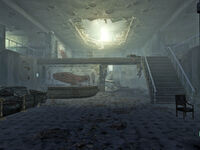 Dumpster with dead bodies and a Big Book of Science

Over turned truck loot view to the factory

Driver's key for the personal footlocker hidden under this crate