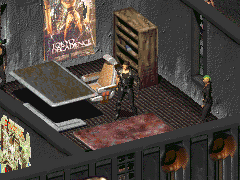 Collect tribute from the Corsican Brothers

“The Corsican Brothers at yer service' (Glances up, irritated, then does a double take.) YOU'RE the new fluffer?”

The brothers, Marty who has his hair slicked back, and whose face is covered with a thin sheen of sweat,[1] and Sid, who wears a toupee and dark sunglasses,[2] run the double G, ensuring slick operation of their juicy business and personally handling prospective talent. Though they show respect for the made men of any of the families, they owe specific allegiance to the Mordinos.

The Corsican Brothers only appear in Fallout 2.

That there is only one of the "Brothers" is likely a reference to the 1941 movie The Corsican Brothers starring Douglas Fairbanks Jr. as both of the two Siamese twin Corsican brothers, separated at birth.

Retrieved from "https://fallout.fandom.com/wiki/Corsican_Brothers?oldid=3341248"
Community content is available under CC-BY-SA unless otherwise noted.