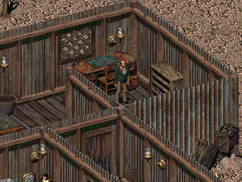 Cornelius has lost his gold pocket watch. Find it and return it to him

“WHY DON’T YOU ASK THAT NO-GOOD FARREL!? MAYBE HE’LL SELL YOU THE WATCH HE STOLE FROM ME! Now if you don’t mind, I’m quite busy. I got to shave the brahmin.”

Cornelius is the old man who helps run Rose's Bed and Breakfast in Modoc in the year 2241. He seems to have a form of senile dementia, and it is hard to obtain any information from him as "certain phrases seem to set him off".

His wife Rose, whom he confusingly says he is going to marry some day, runs the kitchen. The reason that the Bed and Breakfast is called Rose's is due to the fact that he named it for her, and he seems very sentimental towards her. He claims a man named Farrel has been his best friend for 30 or 40 years, but he has recently be enraged by him as he believes that he has stolen his pocket watch.

Cornelius has lost his gold pocket watch. Find it and return it to him: Cornelius claims his inherited gold pocket watch was stolen by Farrel, his best friend for over 30 years, and asks the Chosen One to retrieve it for him.

Cornelius appears only in Fallout 2.

Retrieved from "https://fallout.fandom.com/wiki/Cornelius?oldid=3341241"
Community content is available under CC-BY-SA unless otherwise noted.