Squirrel on a stick
Vegetable starch 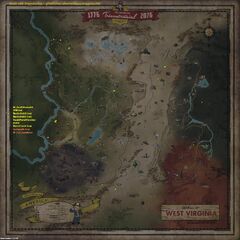 Corn is a consumable item in Fallout 76.

Corn and maize are consumable items, grown across the former United States. The plant grows into a tall, leafy stalk, producing ears of corn that can be harvested and used as food or broken down into components such as vegetable starch.

An uncooked ear of corn harvested from a wild corn stalk. It can be consumed raw to satisfy a small amount of hunger with a medium dose of radiation and chance for disease or can be cooked for additional benefits.

When affected by a blast zone, corn will turn into aftershock stalk, which can be harvested for raw cobalt flux.

Corn can be planted in a workshop or C.A.M.P. using fertilizer and subsequently harvested. It is a component of vegetable starch which can be scrapped into adhesive.

According to a removed Vault 94 greenhouse terminal entry, the corn seen in-game is of the species Zea mays mays, commonly known as maize or corn.[1]