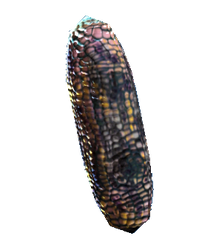 Corn is a consumable item in Fallout 4.

Corn is a cereal grain first domesticated by indigenous peoples in southern Mexico about 10,000 years ago. The hardy plant grows into a tall, leafy stalk, which produces both pollen and fruit. The maize fruit is called a corn kernel and grows in rows inside ears produced by the stalk. As a water-efficient crop that produces highly nutritious fruit that can be processed into food, ethanol, livestock feed, oil, and more, maize has become a staple of wasteland agriculture in both regular and mutated varieties.[1]

For example, New California, with its hot, arid climate, relies on the cultivation of vast fields of maize capable of thriving in the post-nuclear soil. In fact, the economic might of places like the Hub was built upon the tilled fields full of maize stalks, processed into countless process necessary for the post-nuclear civilization to thrive.[2]

Unlike other plants in the Fallout universe, corn hasn't visibly mutated nearly as much. It appears to have a yellowish-purple color, suggesting it may be related to flint maize, also known as Indian corn.

Corn can be used to plant crops in settlements, which can be harvested for food or as a component for Vim or vegetable starch. Like all crops except mutfruit, it provides .5 food per plant when assigned to a settler.

When encountered, Abigail Finch offers to purchase corn from the player character for two caps.

Vegetable starch can be broken down into adhesive, a valuable component for crafting. This makes corn one of the most valuable crops to plant, along with mutfruit and tatos.

Retrieved from "https://fallout.fandom.com/wiki/Corn_(Fallout_4)?oldid=3371022"
Community content is available under CC-BY-SA unless otherwise noted.
... more about "Corn (Fallout 4)"
RDF feed
Has platform
PC +  and Xbox One +