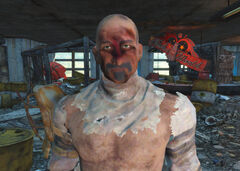 Corin is a dead raider in the Nuka-station in 2287.

Corin appears only in the Fallout 4 add-on Nuka-World.