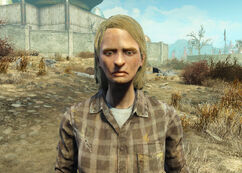 Cora is a merchant traveling outside of Nuka-World in 2287.

Cora appears in a random encounter. She can be found in a shack to the south of the Galactic Zone or between a small cluster of buildings at the extreme southeast corner of Nuka-World. Cora is a merchant who is on her way to Diamond City when the Sole Survivor encounters her, her sister Chelsea and brother-in-law Peter. She tells the Sole Survivor she is headed there to find a place she could finally call home, after being told about it by traders.

Cora can be convinced to go to Nuka-World, rather than Diamond City, by passing a Speech check, telling her it is perfectly safe. If bartered with, she primarily sells junk.

Cora appears only in the Fallout 4 add-on Nuka-World.

Small random encounter camp
Add a photo to this gallery
Retrieved from "https://fallout.fandom.com/wiki/Cora?oldid=3286847"
Community content is available under CC-BY-SA unless otherwise noted.