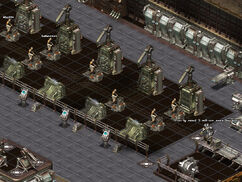 Free them from their agony. Or not....

Liberation of the human battery

Coppertops is a special encounter in Fallout Tactics.

In a hidden warehouse named Coppertops, several humans (called "human battery") are running on treadmills to produce energy, particularly to charge small energy cells, for the Calculator's army, under the supervision of the gloating robot.

This special encounter is a reference to the 1999 science fiction-action film The Matrix.

Coppertops exterior
Add a photo to this gallery
Retrieved from "https://fallout.fandom.com/wiki/Coppertops?oldid=3102834"
Community content is available under CC-BY-SA unless otherwise noted.