Fallout 4
“You may enter, Mr. Hildenbrand. Have a nice day.”— Copley station intercom

Copley station is an unmarked location in the Back Bay neighborhood of Boston in 2287. It is on the Green Line in the subway system, and is just north of and connects to Boston Public Library.

The station is a standard metro station occupied by super mutants, including a super mutant suicider.

From the street entrance on the north side of the library, stairs to the southeast descend to the main subway platform. Proceeding south along the platform then turning west and north around the first subway car allows access to an open car containing a cooking station, a mattress, and two dead traders. To the east of this car is a short side corridor containing a chemistry station.

On the east side of the platform, a stairway leads up to the Advanced-locked entrance door to the library. Passing an easy speech check at the nearby intercom will unlock the door, and will also trick the security system into thinking the player character is an employee, making all turrets and Protectrons inside the library friendly towards the player character. Attacking a friendly turret or Protectron will then result in combat with that unit only.

Copley station only appears in Fallout 4.

Copley station is based on the real-world Copley station, located under the Boston Public Library McKim Building. The street-level entrance on the north side of the library in-game is nearly identical to the entrance in the real world.

The library entrance intercoms may respond like an NPC (e.g. with "Huh?" or "Yeah?") instead of starting the dialogue explaining that the library is closed. This will make the entrance door to the library impossible to open without lockpicking, and leads to the turrets in the library followed by the resident Protectrons becoming hostile. Restarting the game or reloading a save won't fix the issue. However, entering the console command player.addtofaction ff404 1 before being detected by the automated defenses will make the player character an ally of the turrets and Protectrons. 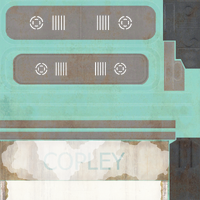