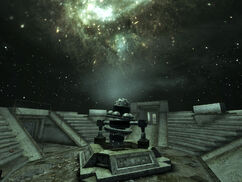 “For as long as history has been recorded, man has had an insatiable hunger for knowledge regarding the universe. To understand why man is so interested in this unknown expanse of space around our little world, we must take a journey. Please, sit back, relax and free yourself from the bonds of our planet as we take off for the [bzzt] stars! stars [bzzt] planet as we [bzzt] stars sta- [audio reverses rapidly]”— Planetarium terminal

Before the war, several events were featured around the planetarium, such as the Spaceflight Gallery, the Virgo II Moon Lander replica, and the G-Force simulator ride. The planetarium itself allowed for a tour of the stars. All exhibits were sponsored by the United States Space Administration.[1]

Movies were shown in the Copernicus Planetarium, including:[2]

The planetarium consists of the main hall with the projector in the center of a circle of seats for the audience. The audience circle also contains the show control terminal. To the side is a maintenance room which consists of tools and other supplies.

There is nothing in the planetarium itself, but there is a small equipment cache left in the maintenance room. Inside is a Nuka-Cola Quantum and a locked weapons locker.

The Copernicus planetarium appears only in Fallout 3.

Retrieved from "https://fallout.fandom.com/wiki/Copernicus_planetarium?oldid=3271334"
Community content is available under CC-BY-SA unless otherwise noted.